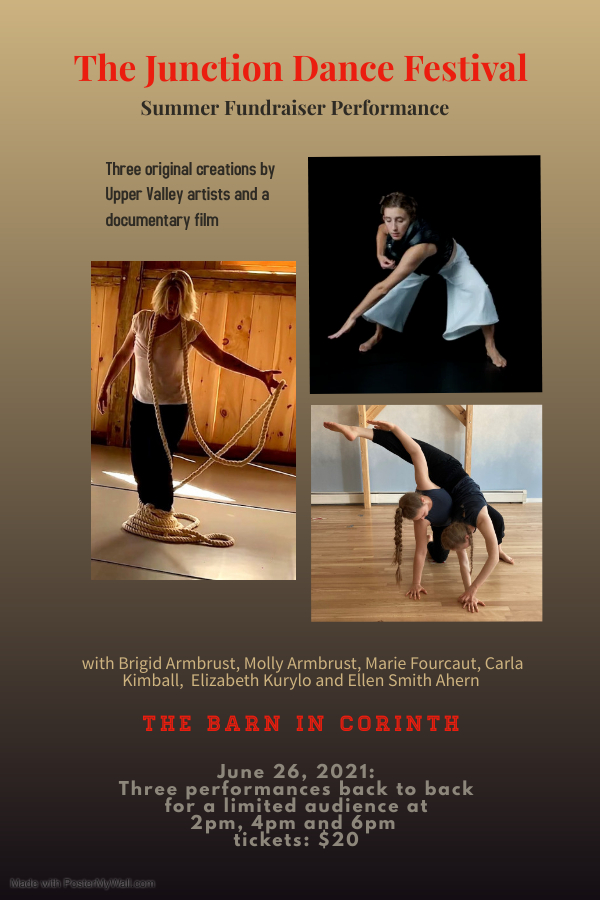 Don’t miss the Junction Dance Festival fundraiser on June 26, featuring four Upper Valley dancers choreographers and a documentary film about the profound transformation that operated within each artist as they seek to adapt to the pandemic.

Three shows back to back at 2pm, 4pm and 6pm. The Barn in Corinth is located at 1804 Pike Hill road in Corinth, VT. Tickets are $20 and sold online through Seven Days ticketing (scroll below for link). No tickets will  be delivered at the door.

Marie Fourcaut, born in Algeria and raised in France, began her professional dance career in Paris at the age of 16 and has worked with leading international modern dance companies around the world. She collaborated and performed in acclaimed productions with Martha Clarke. She has been teaching yoga and her own movement classes in the Upper Valley. With the “Ensemble Marie” she created two events in Hanover, NH, one at the Black Family Visual Center in 2017, two at the Hood Museum in October 2019. Most recently, she and Carla Kimball created a film around Carla’s Installation at the Ava Gallery ”Memories In Solitude”. Marie is a founding member of the Junction Dance Festival, Inc.  Marie will perform Farewell, a woman’s journey through life told in synergy with a rope. Concept and direction: Elizabeth Kurylo. Poem by Robert Burns set to music by Arvo Part.

Ellen Smith Ahern grew up dancing in Illinois and came east to study dance at Middlebury College ’05.  Since then she’s collaborated with many artists, including Jane Comfort & Company, Lida Winfield, Kate Elias, Rebecca Pappas, Hannah Dennison, Pauline Jennings, Polly Motley, El Circo Contemporaneo, Amy Chavasse, David Appel and Tiffany Rhynard’s Big APE.  Ellen has had the opportunity to perform and teach throughout Mexico, Cuba, Qatar, Europe and the US.  With support from NEFA, Dance Films Association, Ucross Foundation, The Field, VT Arts Council, Flynn Center, VT Arts Endowment Fund, Coginchaug Valley Education Foundation and the National Endowment for the Arts, she has shared her work through film, installation and live performance in a diverse array of venues such as Dance on Camera Festival/Film at Lincoln Center, Bates Dance Festival, AVA Gallery & Arts Center, the Middlefield Community Center, Dixon Place, the Flynn Theater, the Ionion Center of Kefalonia and the Rococo Theatre in Prague.  Ellen lives with her family in New Hampshire, where she continues to work as an independent artist and practice social work, organizing with communities for migrant justice and racial equity. Ellen will perform Dance with Trees and Absent Forest, choreography and performance: Ellen Smith Ahern. Sculpture: Stefania Urist. Sound: Jacob Elias, Amanda Sisk, Ellen Smith Ahern and Scott Walker. Dance with Trees and Absent Forest is the second iteration of an ongoing conversation between Ellen and Stefania, originally presented by the AVA Gallery and Arts Center in March ’21.  Their collaboration explores shape, movement, stillness and the resulting relationship between human and tree bodies.

Brigid and Molly Armbrust, 18 and 15 years old, respectively, are sisters who have been dancing together their whole lives. They enjoy exploring contemporary technique, partnering, the Axis Syllabus, and improvisation. In addition, their experience in ballet, yoga and martial arts has shaped them as dancers/movers. In partner work, they enjoy exploring shared center(s) of gravity, blurring the boundaries between lifter and lifted, and letting lifts/extensions come from a place of settling/sinking. They are also intrigued by the many movement possibilities that open up when using momentum and anatomical structures rather than just strength to safely and effectively carry and channel each other’s weight. They are excited to share their duet, which explores their relationship as sisters and as dance partners, how this relationship has evolved throughout their lives, and how it continues to shift as Brigid prepares to leave for college this fall. Outside of dance, they share many interests including linguistics, reading, and social/environmental justice work. Brigid and Molly will perform A Hundred Rivers. Choreography and performance by Molly and Brigid Armbrust; music: Dante’s Prayer by Loreena McKennitt.

Carla Kimball, Photographer/Videographer As a fine art photographer, Carla has exhibited in multiple venues throughout the Vermont and New Hampshire Upper Valley region.  For the last 10 years she has studied, performed, filmed and photographed the dancers of Ensemble Marie with choreographer Marie Fourcaut. As part of a solo photography exhibit this spring at AVA Gallery in Lebanon, NH, Carla produced a video a movement response to the exhibit featuring Marie. With the current Pandemic realities that all performers face, Carla is recognizing the value of documentary and artistic films for dancers that goes beyond a simple video capture of a staged production.  After completing an intensive documentary film workshop this summer to add to her video skillset, Carla is now completing a second dance video and is beginning three other dance/video collaborations with Upper Valley choreographers. Carla filmed  and edited the documentary Covid, A Poem and A Rope

Elizabeth Kurylo was born and raised in France, Elizabeth studied ballet, Russian character and modern dance in Paris. She danced professionally in France before moving to New York City to study with Merce Cunningham. She stopped dancing to raise a family and  work as a physical therapist but returned to her former passion in 2003. Since, she danced with the Dartmouth Dance Ensemble in Hanover and What’s Written Within in Edgartown. She had the opportunity to collaborate with dancers of the Yard, and her choreographies were performed at Built on Stilts, and the Hebrew Center in Martha’s Vineyard. She created original work for the Vermont Dance Alliance Winter Gala for two consecutive years. For the past seven years she focused her attention to the study of baroque dance, going as far as Sweden to learn the technique with baroque dance teachers and choreographers Ken Pierce, Catherine Turocy, Caroline Copeland and Beatrice Massin.  She is the founder and president of the Junction Dance Festival, Inc and host of the ChoreoLab. Elizabeth received a grant from the Vermont Arts Council for the production and direction of  Covid, A Poem and A Rope. Elizabeth conceived and directed Farewell

Stefania Urist earned her BFA in 2013 from the Rhode Island School of Design’s Glass Department. Since graduating, Stefania has been working as a conceptual sculptor, addressing ideas about gender, growth, architecture, and the environment. Form, construction, and craft are key elements of Stefania’s practice; inherent in her work is a deep admiration for materiality, process, and transformation. Stefania has attended and created new stimulating sculptures at many vibrant artist residencies, including receiving a grant to attend the Vermont Studio Center and spending a month at Elsewhere Studios in Paonia, CO. Most recently she completed a Maker Creator Research Fellowship at the Winterthur Museum, Garden & Library in Delaware where she researched the best practices for conserving outdoor sculpture. Stefania has shown her work in group and solo shows across the United States, including New York, Boston, New England and Colorado. In 2019 she was the featured female artist of Sculpture Fest, a sculpture garden in Woodstock, VT. She has been enjoying sharing her love for glass by teaching different glass techniques at workshops, glass, and craft schools since 2013. Stefania currently lives and creates new work in Londonderry, VT. Stefania created the sculpture for Dance with Trees and Absent Forest